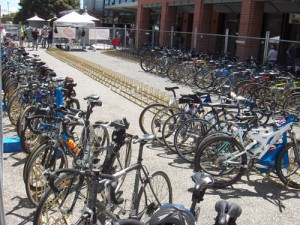 We were the official supplier of Bicycle Parking for the Bicycling Australia Trade Show when it was held in Sydney. We operated a free bicycle parking service which allowed visitors to the show to park their bicycles outside the building.

At this show we also provided bicycle racks for the bicycle “Test Ride Area”. This was a separate area outside the building where bicycle wholesalers allowed members of the public the chance to test ride some of their new models. Our bike racks were used to keep the bikes upright when they were not being ridden, but as you can see our bike stands were mostly empty as the bikes spent a lot of time being test ridden!

Overview Preparation Before implementing the Bike Education Program in your school, it is recommended to read the Principles... DELIVERING THE BIKE EDUCATION PROGRAM IN AUSTRALIA